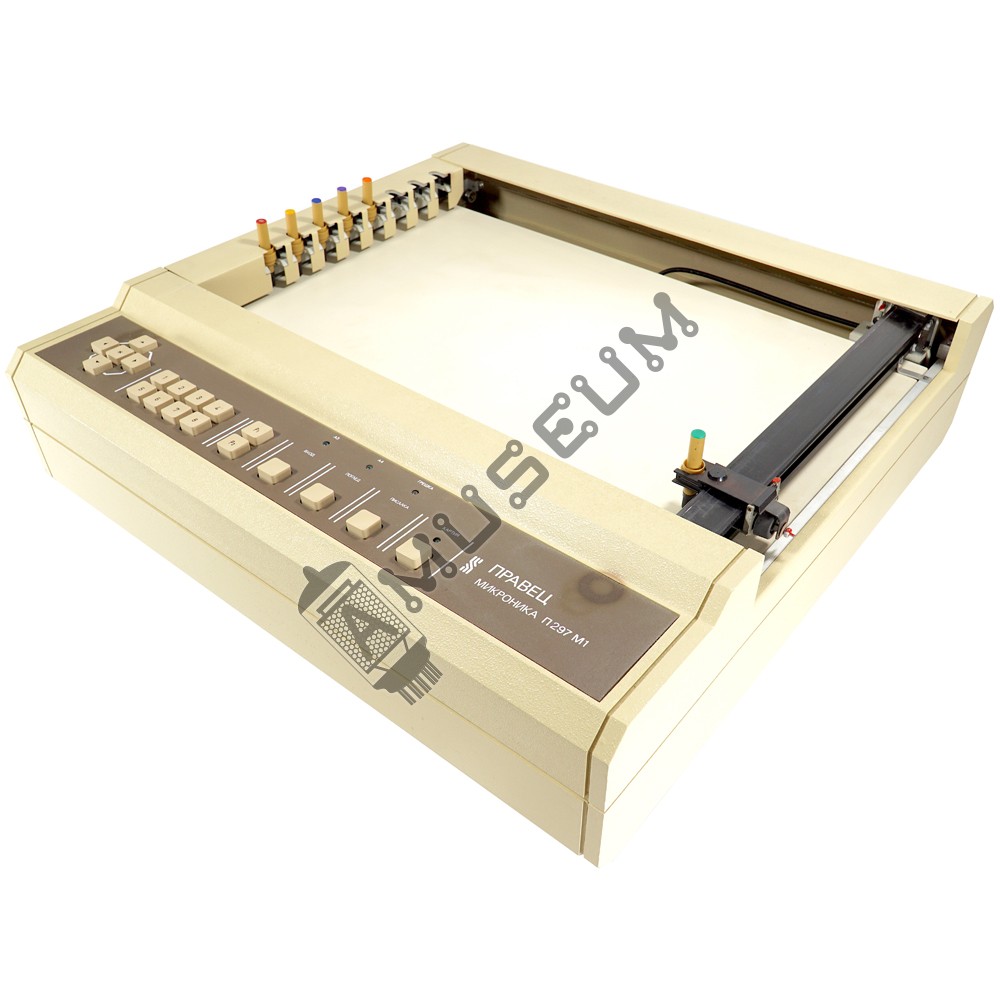 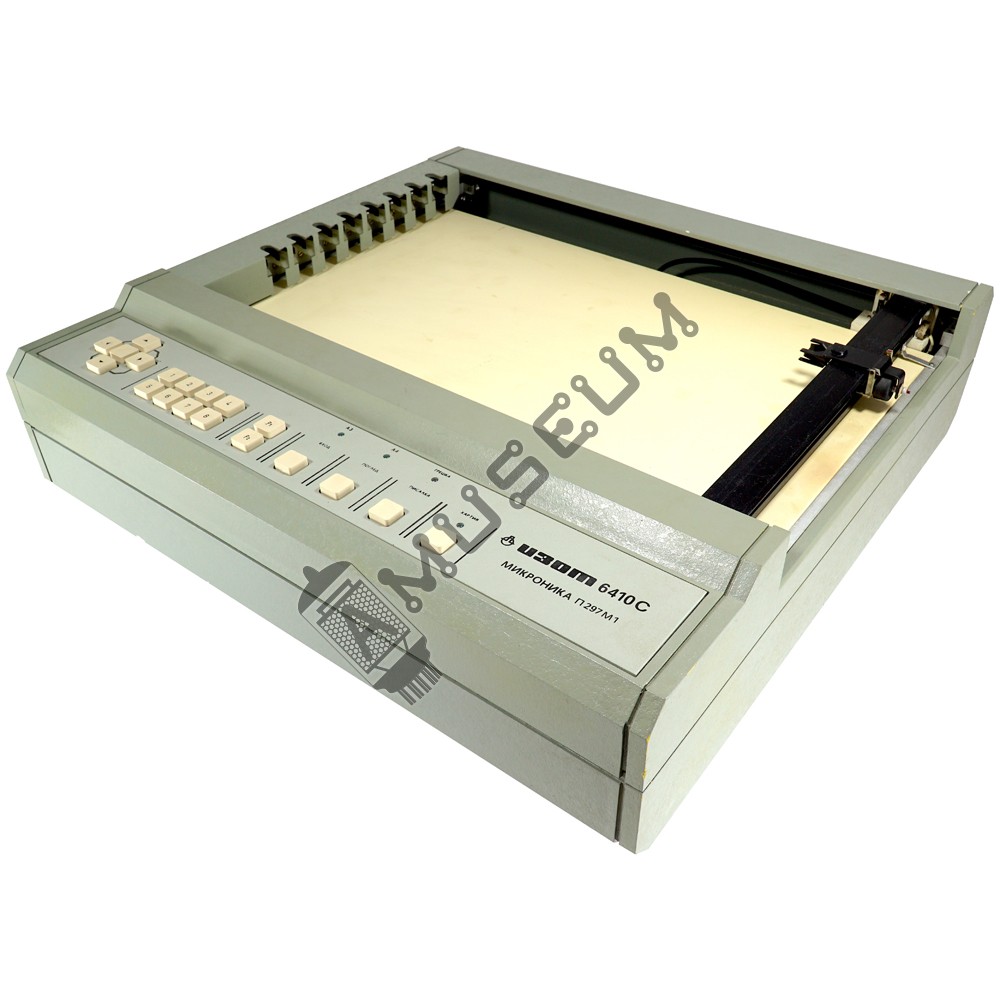 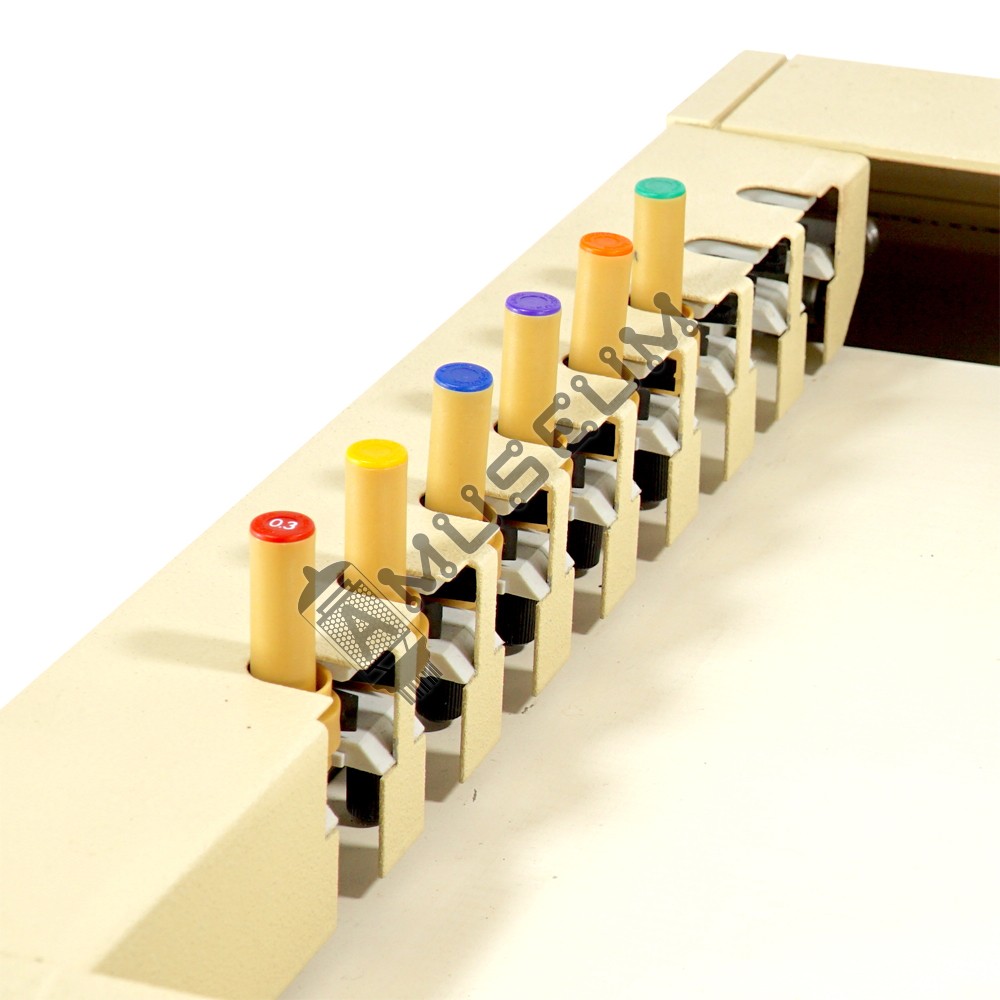 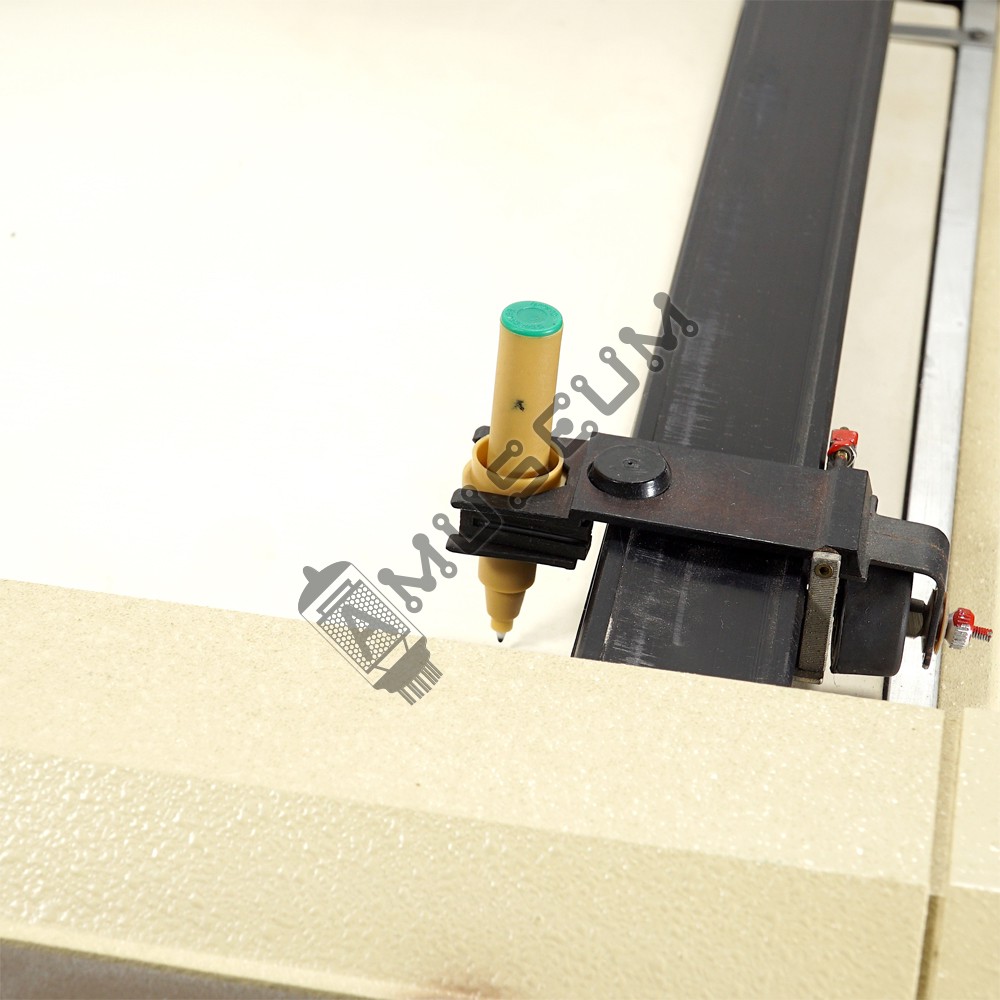 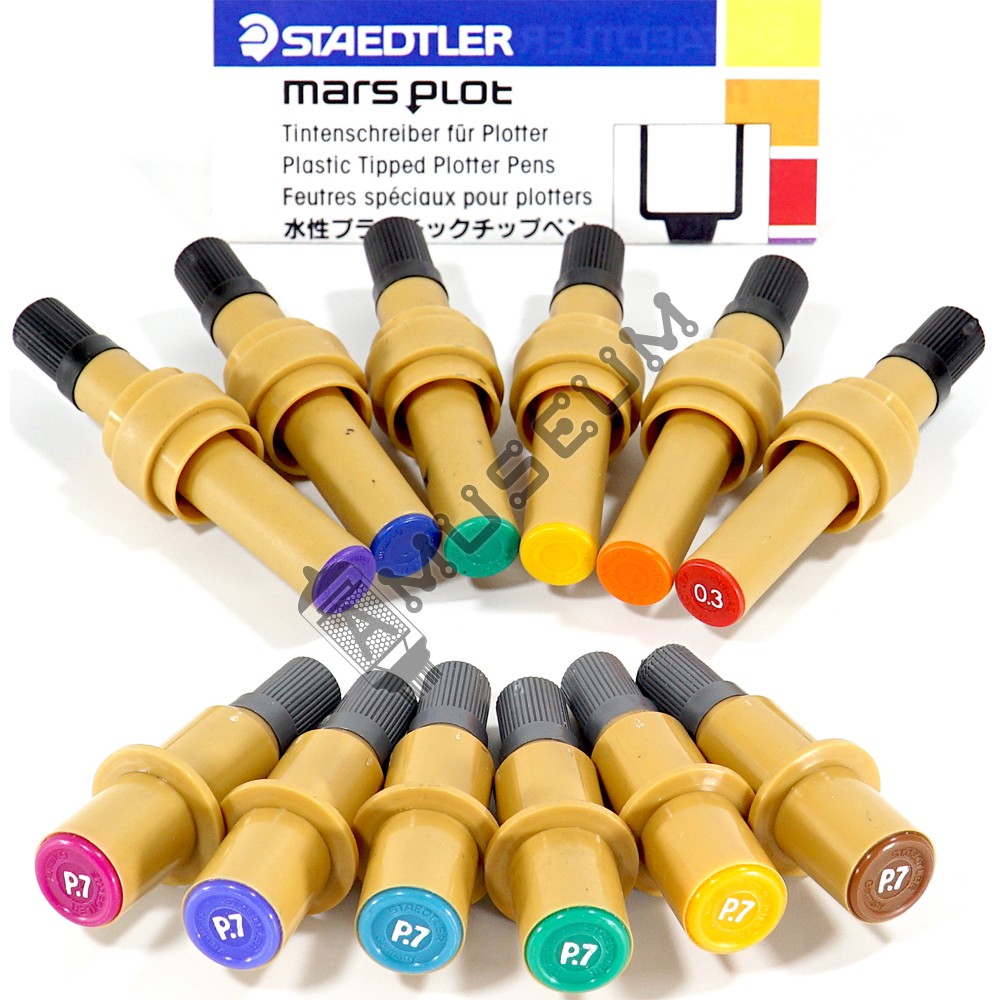 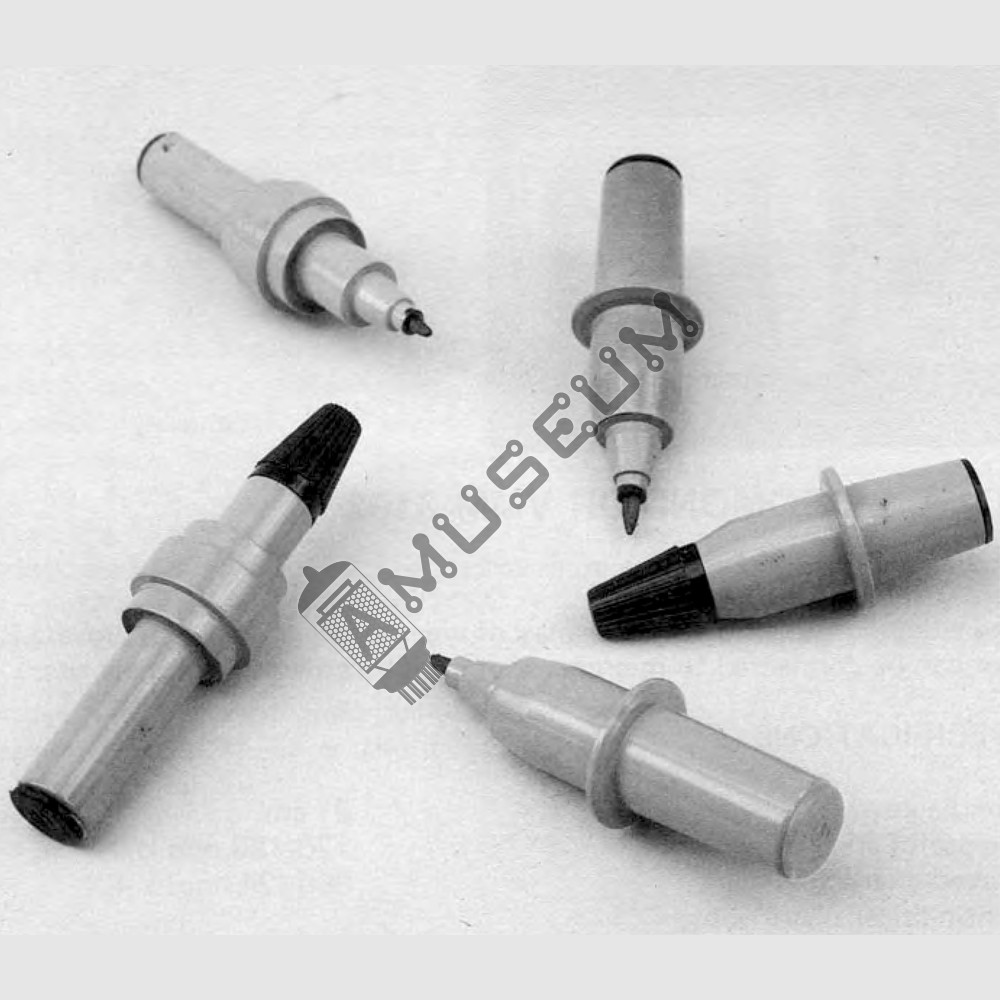 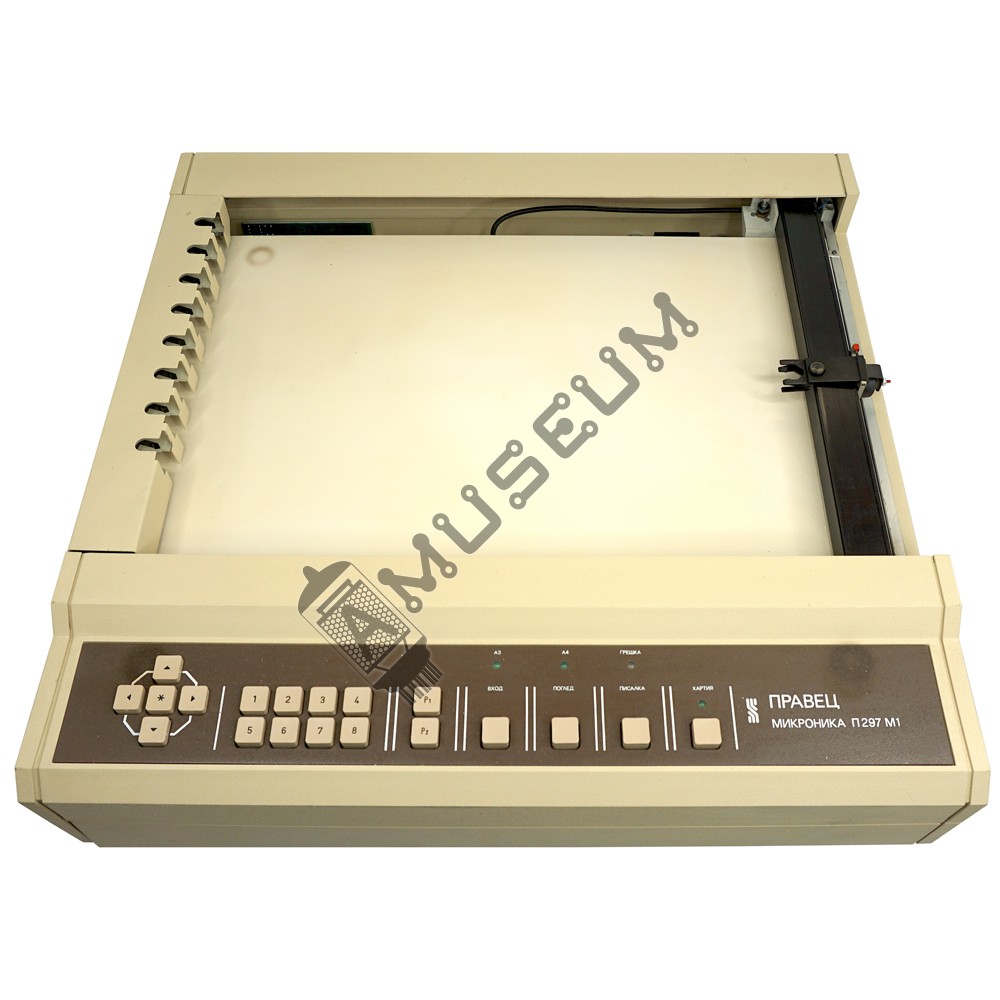 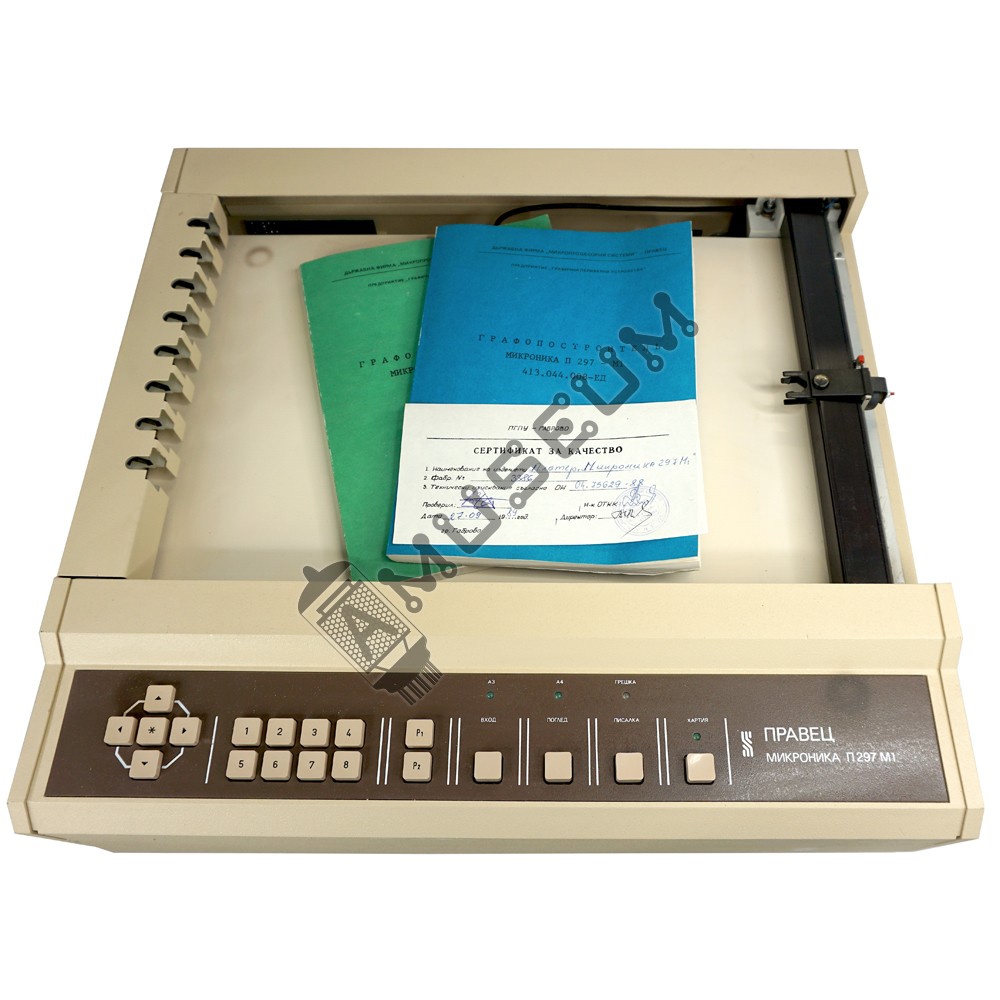 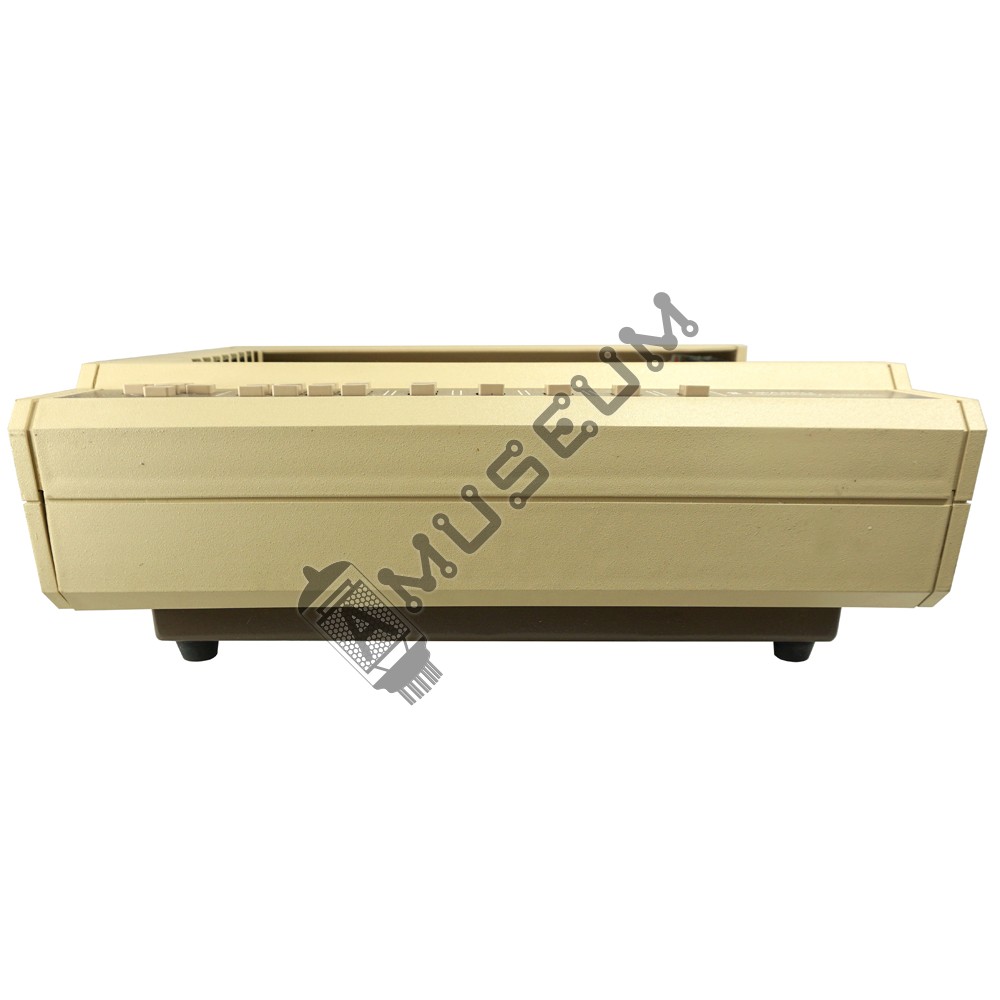 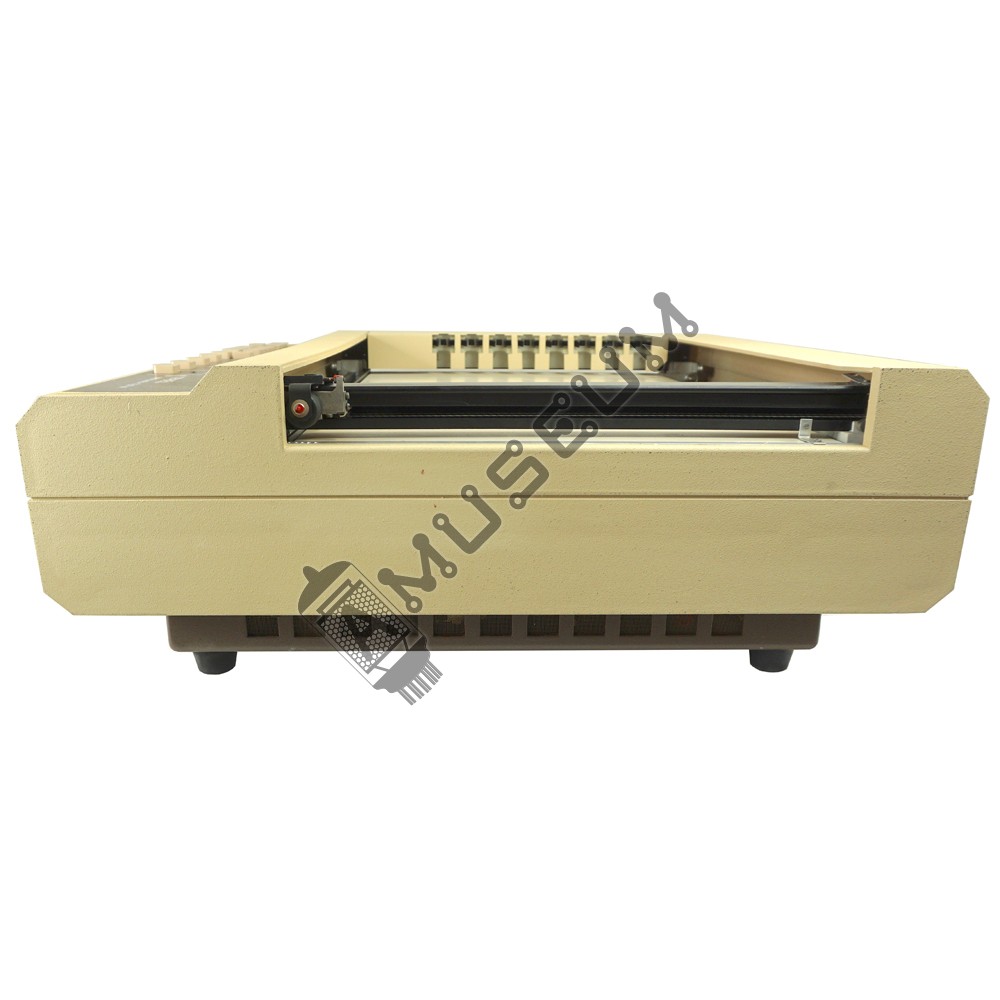 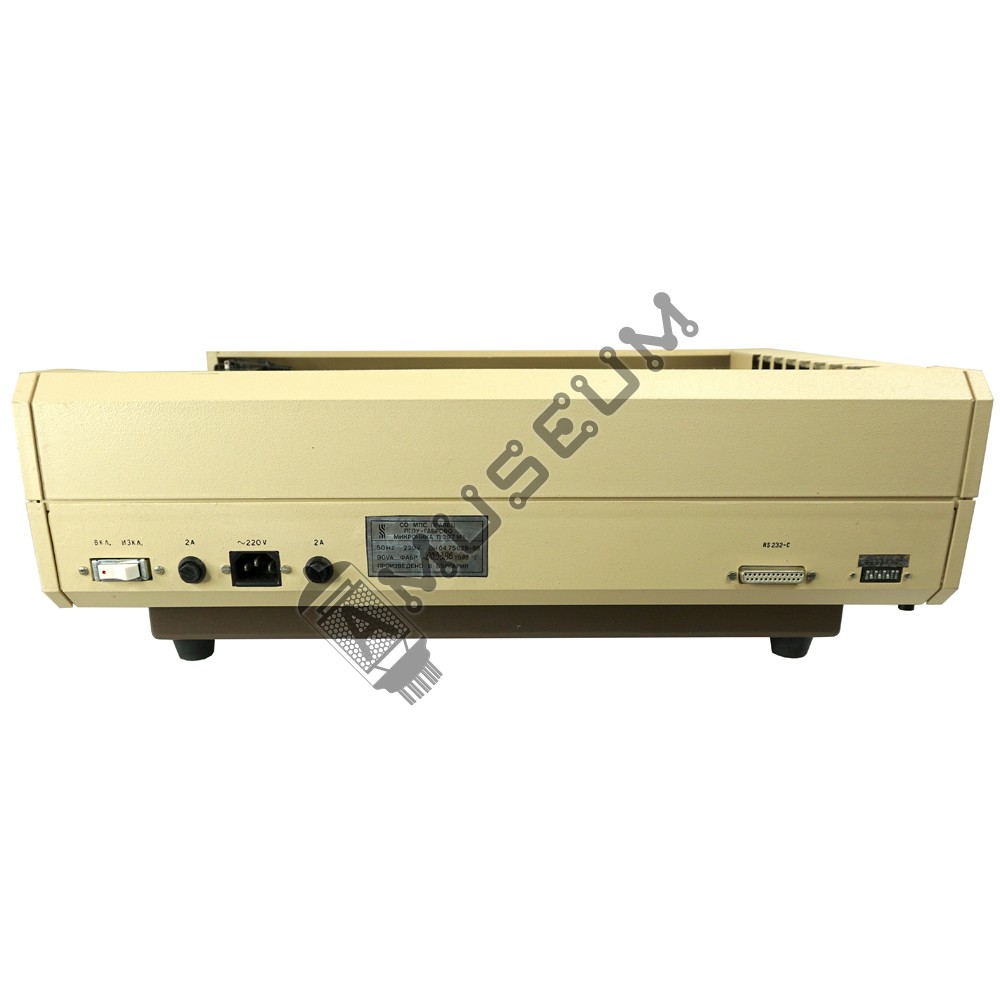 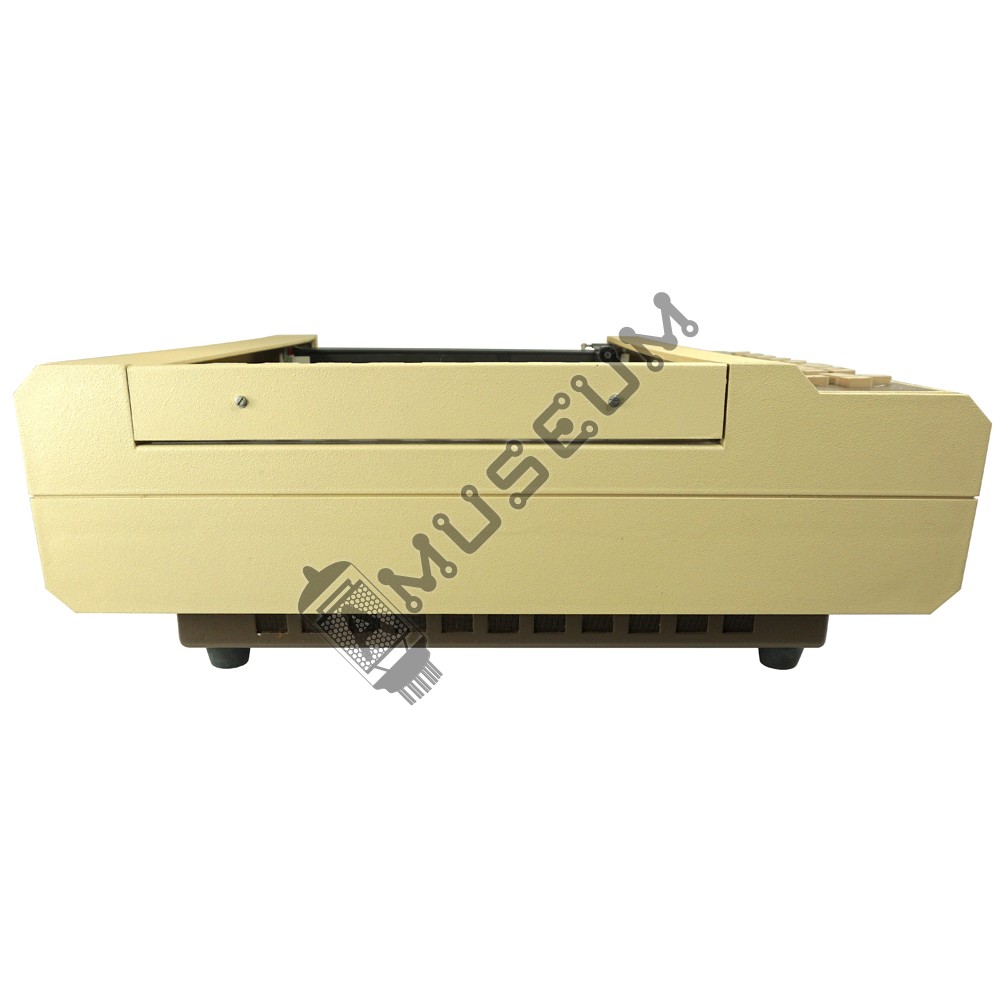 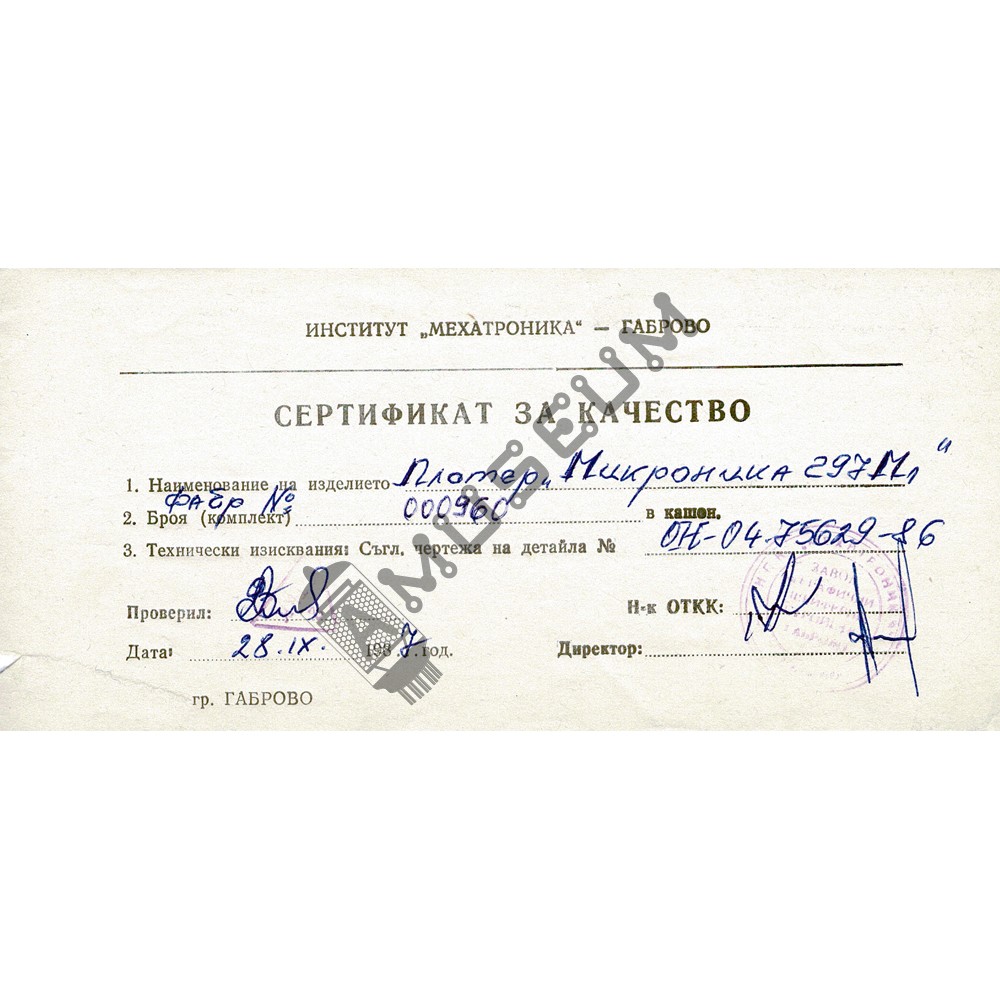 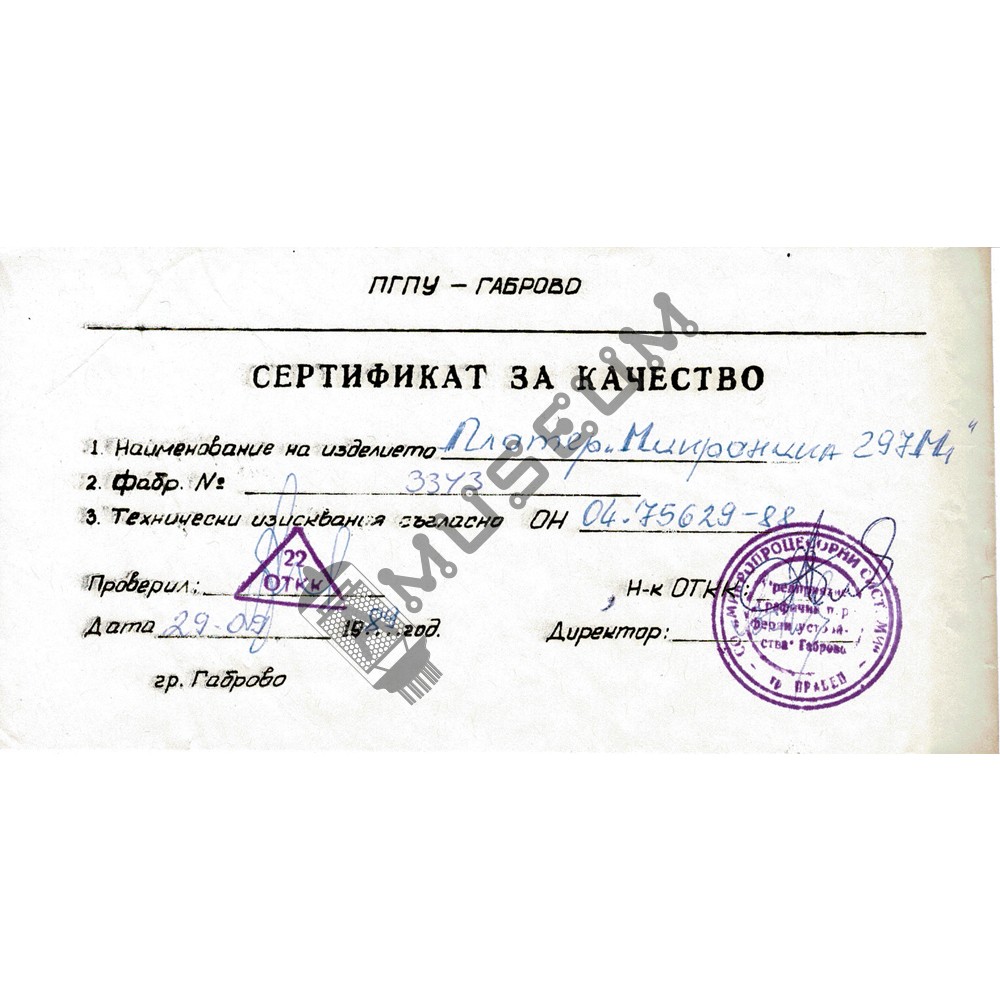 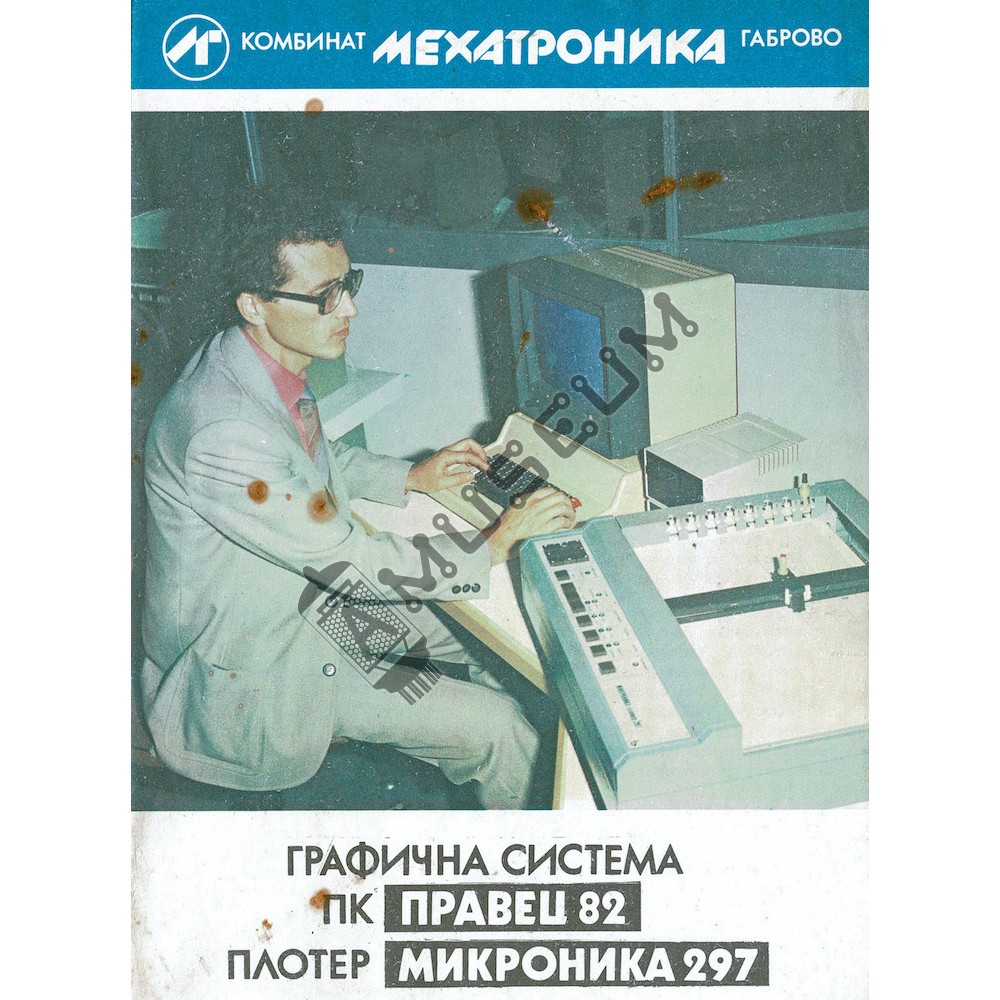 Condition Excellent. Looking for the third version with the inscription only "Micronica"
Shown for the first time - No information.
Developed by a team led by Eng. Petar Nikolov.
Years of production - No information.
Our exhibits are from years 1987 and 1989
Probably the beginning was set in 1986, if we consider the number of the industry norm.
Manufactured units - No information. Our exhibits are with serials № 960 and 3386
Manufacturer PGPU Gabrovo
Power supply 220 V, 150VA
Size and weight 550 x 525 x 194 mm
Colors:
ISOT - Blue-green with a metallic, unpainted bottom
Pravets - Ocher with a brown bottom

This product meets the designation IZOT 6410C, Pravets or Mikronika P297M1 The plotter Mikronika PR297 graphic peripheral device designed for output of graphic and alphanumeric information from mini and microcomputers and desktop systems, etc., on a drawing sheet. It is widely used in mechanical engineering, electronics, geodesy and cartography.

Drawing can be done with two types of writing instruments - rapidographs and felt-tip pens. Located in a store device of eight of different color and thickness. From the pine to the pen is done automatically. The plotter is connected via a standard RS232C interface with mini and micro computers, stations and desktop design systems.

Text of the advertising leaflet of the product:
GRAPHIC SYSTEM PC PRAVETS 82 PLOTTER MICRONICS 297 The graphics system (GS) is a desktop microcomputer system built entirely of devices manufactured in Bulgaria. It is a tool for streamlining and automating specific design activities. The system is oriented towards work in the field of mechanical engineering, but with further development of the program part it can be applied in other areas as well. It facilitates and speeds up the process of creating, correcting and drawing small machine-building drawings and graphics. The graphic system includes:
- personal computer (PC) "Pravets 82" with 48 kV RAM;
- storage device with flexible magnetic disk (ZUGMD) (floppy disk) 5088-02 with 140 kV;
- plotter "Micronika 297";
- connection board via RS232C interface;
- basic graphics program (BGP), managing the operation of the system.
The basic graphics program is a package of programs written in BASIC - a variant for a personal computer "Pravets 82". Due to peculiarities in the organization of the memory of the personal computers, the separate programs of the BGP work independently and are connected to each other by commands from the operator. The graphics system runs on a disk operating system (DOS) 3.3. The connection between the system and the operator is through a dialog maintained on the display. The dialogue is conducted in Bulgarian and does not require special knowledge to work with computers. This simplifies and simplifies the use of GS and makes it accessible to a wide range of users.
The functions of the graphics system are:
- drawing segments - by setting coordinates or pointing with a moving marker;
- drawing arcs - by numerically setting the center, radius and arcs or indicating the center with a pointer;
- choice of line types;
- display of text - horizontal and vertical, the beginning is determined by the movable pointer;
- deleting elements from the drawing field by indicating with the movable pointer the desired element;
- drawing of coordinate axes (grid);
- translation and rotation - allows to repeat with displacement of already drawn elements;
- window - allows to select a certain section of the drawing field, to enlarge and make adjustments in it, and then to return it to its place;
- display of some mathematical functions - visualizes on the screen the development of several mathematical functions for a given change of their argument;
- saving a ready drawing - writing on ZUGMD and drawing the plotter;
- work with an old drawing - previously created drawings for current processing can be called by ZUGMD.

If you have more information about this exhibit, please share it with the museum here.